WMS market set to more than double growth by 2024

The market for warehouse management systems is to reach $4.1 billion by 2024 according to a new report from Transparency Market Research.

This marks more than double growth projected for the market. The industry was valued at $1.2 billion in 2015 but is now expected to $4.1 billion in the coming years with a compound annual growth rate (CAGR) of 14.1%.

It found a high level of consolidation in the industry with SAP and Oracle taking up almost 40% of the market. However, Transparency Market Research also found that many North American players building and selling software were expanding in Europe and emerging markets.

Canadian company Tecsys has expanded its European presence by launching in the UK, Italy, France, Germany, Spain, and Portugal while emerging countries like India, Brazil, China, and Indonesia have attracted attention.

Europe has accounted for 43% of revenue in warehouse management systems but Asia-Pacific has recorded strong growth as well, according to the research. Most systems were used by third-party logistics and the pharmaceutical sector.

Asia-Pacific and the retail sector, thanks to the growth of online shopping, are expected to be big areas for warehouse management systems, the study said.

“Rising urbanization and the consequent increase in per capita income have brought about a remarkable transformation in the retail sector in the region,” wrote the authors.

They added that there are still challenges for the industry though, mostly in initial investment costs which may hinder wider adoption. 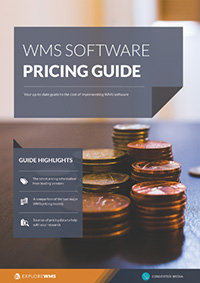 Your up-to-date guide to the cost of WMS software